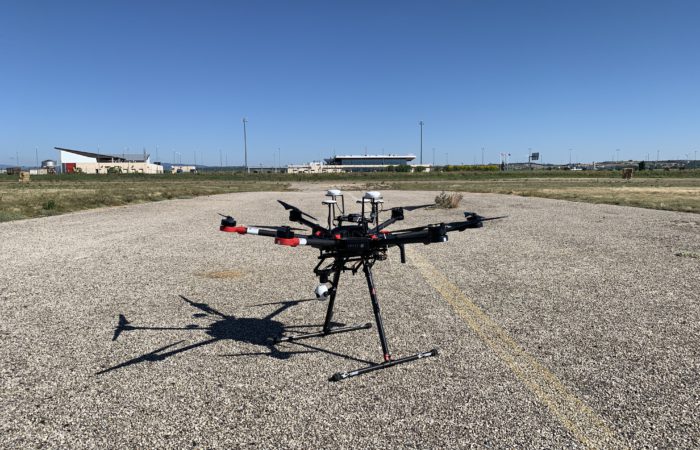 Canard Drones carried out the inspection of all the pavement at Burgos airport, along with other maintenance tasks between June 29th and July 1st. As Burgos is a VFR (visual flight rules) airport, operations were coordinated with all the companies and institutions involved, such as AENA and SAERCO (a private company, provider of air traffic services), as well as FlyBy Aviation Academy, a school that operates at the airport.

Inspection of the entire airport pavement took less than two hours, compared to around a week by traditional methods. These pavement inspections are carried out approximately every two years. The use of CANARD’s solution will reduce the inspection intervals, and will provide a greater and better knowledge of the condition of the pavements to AENA.

During these days, aerial photogrammetry was used to survey airport areas and generate 3D models of the terrain and structures. These 3Dmodels are necessary for AENA to update their ETOD (electronic Terrain & Obstacle Database) as required by ICAO. These surveys currently depend on airplanes to carry them out, with a less than desirable frequency. Updating the 3D database in Zones 3 and 4 frequently, which are the most critical, will mean an improvement in the security of operations.

Likewise, the runway lighting, the PAPI system and the VOR were inspected by CANARD. It is important to note that all these works, were carried out in just three days during certain windows to avoid disruption to airport operations, demonstrating the maturity of the solutions implemented.

CANARD has signed a Collaboration Agreement with AENA for two years to evaluate and validate the solutions and procedures carried out at its airports. This operation was attended by Pablo López, from the AENA Department of Innovation and Customer Experience, Ángel Antonio Otero, Director of Burgos Airport and Sofía Maura, expert from the uSIG (unit of Geographic Information Systems) of AENA.